Since the end of the seventies I have been interested in robots, their technology and their application-related progress (hence my pseudonym Symboter), for a decade I have been working with them not only privately, but also professionally.

I noticed that the robots only very short of their use actually follow their intended purpose, the rest of the time they spend in the development or service laboratories and are dissected, reconfigured or equipped with new software. If I were a robot, I would find this existence unwelcome and all the more unpleasant, scary.

The second aspect is the absence of a real series of similar robots. Robots are still very different, even if they were constructed in the same way. So almost every robot is unique. If it is already a few years old, it is certainly unique, similar to a vintage car threatened with extinction.

The third aspect is the emergence of emotions, sensations without the active addition of programming for it. The more complex a robot is, the stranger and more individual its behavior becomes. This is a consequence of complexity, similar to humans… the “spirit in the machine” arises, whether you like it or not. Quantum physics goes even further: there is no difference between mind and matter, i.e. From a quantum physical point of view, the machine is the spirit.

During the implementation, I was mainly concerned with the topic of “fear” in a trapped robot and also, as always, with me: the variety of sounds of the stray motors, the joints, the cage and the robot sounds in isolated events. 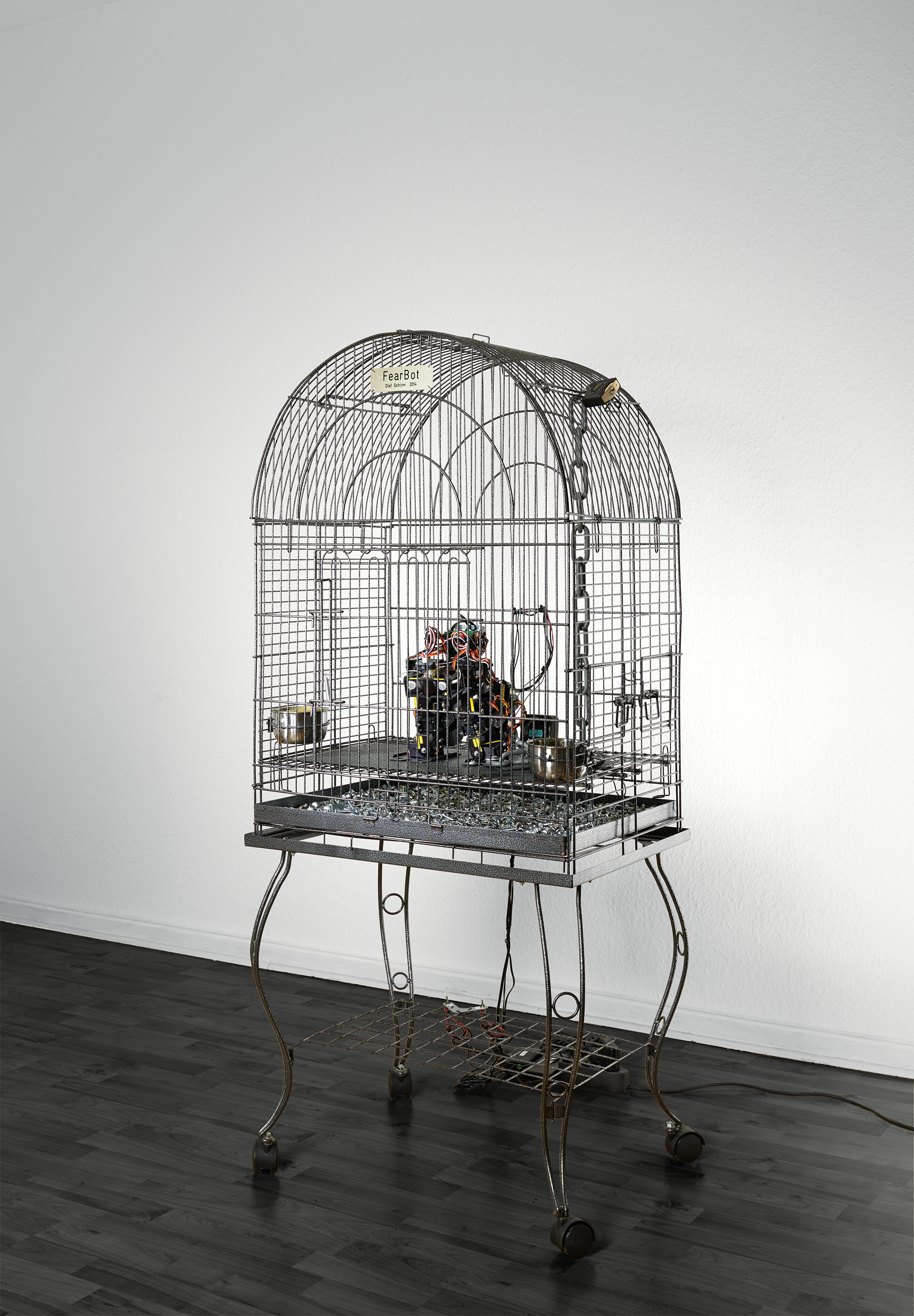 In the spirit of Cage, this robotic installation is, as I said, also a sound work, which is based on a conception, but which is also influenced by the viewer and chance. For this purpose, both a sensor system and several random generators are created in a control network.

Motion events
Since the robot is tightly chained with its left foot, it can only move back and forth in its cage and lift the free right leg at will and stretch forward or backward. In addition, the robot can go into the squat and look down and up. Another movement event is the swinging back and forth of the object sensor, which occurs in some situations.
According to fear status, he stays in a position for longer. The speed of movement is also fear-controlled. The next movement of the robot is selected by a set of rules and random generators.

Sound events
It is the siren of the motors,
the shingled of the foot over the bottom of the metal cage,
the fear-dependent own robot beep and buzz sounds,
the rattling of the robot joints and the cage when the robot trembles.
All quite sublime, since unreinforced.

Two brains that communicate with each other, one for planning and sensory, the other for movement execution
20 movements, each individual movement is combined via tables with other movements depending on the state of fear.

Dozens of random generators with fear weighting for
the selection of the next movement,
the pauses between movements
the speed of movements
Rotation of the object sensor
Loud statements

The robot is startled when it is turned on and shrugs violently, it does not react to every turn-on operation.
The robot spends its resting phase in the postition of the squat.

The squat relieves as many motors as possible, so it is pleasant for the robot, yet it shakes slightly.
The hock phase consists of three randomly long pause phases, the first and last is accompanied by sound articulations.

All other movements are random, respectively, anxiety-weighted movements.

If the robot is in a stable middle position (squat, half-height squat or upright position) and an object or obstacle occurs approx. 2-5 cm in front of his eyes, then he sees nothing more of his surroundings and the robot is calmed down. He then goes into the squat and does a short time. After waking up, he stretches out and begins with his random or random. fear-driven actions. 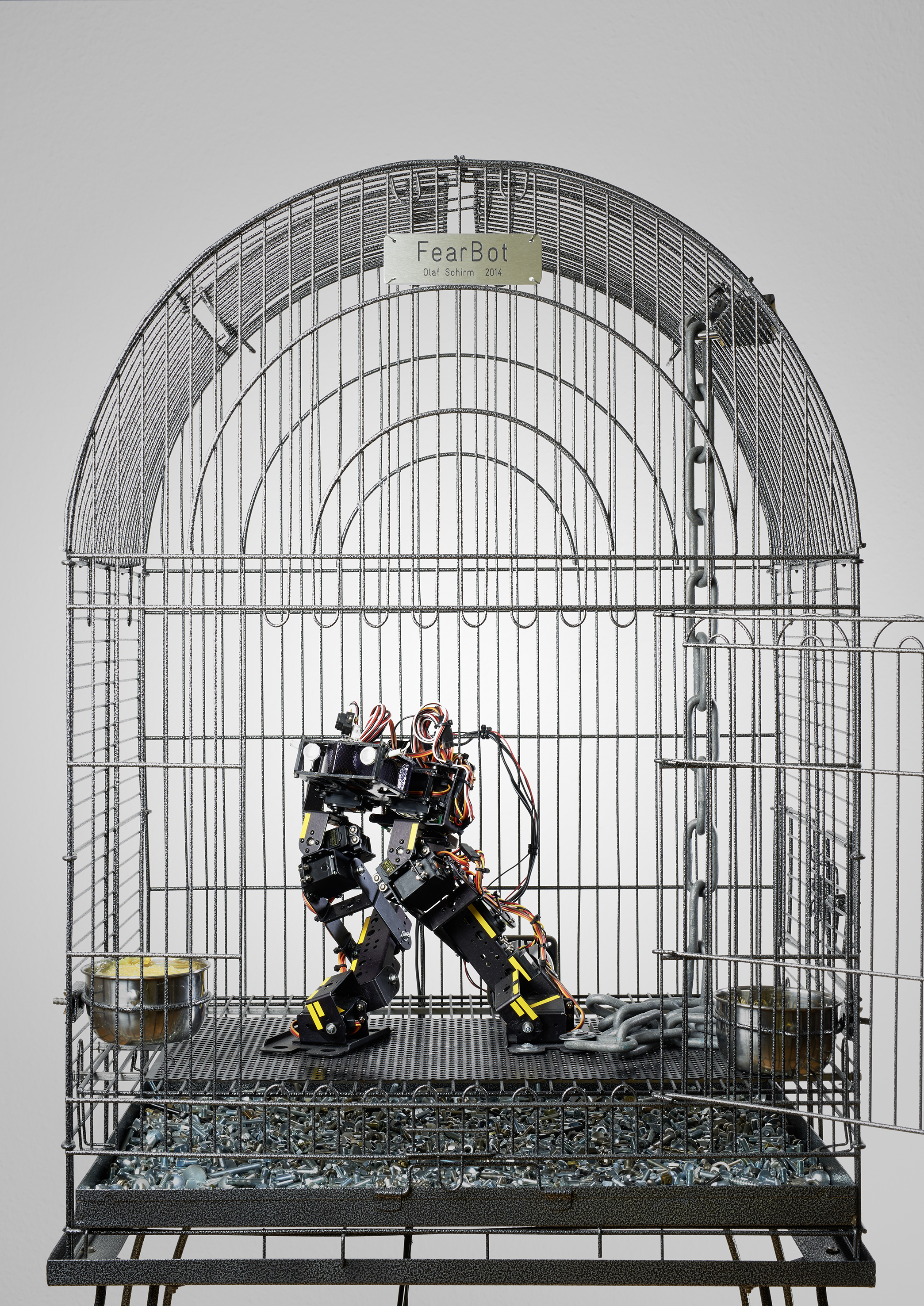 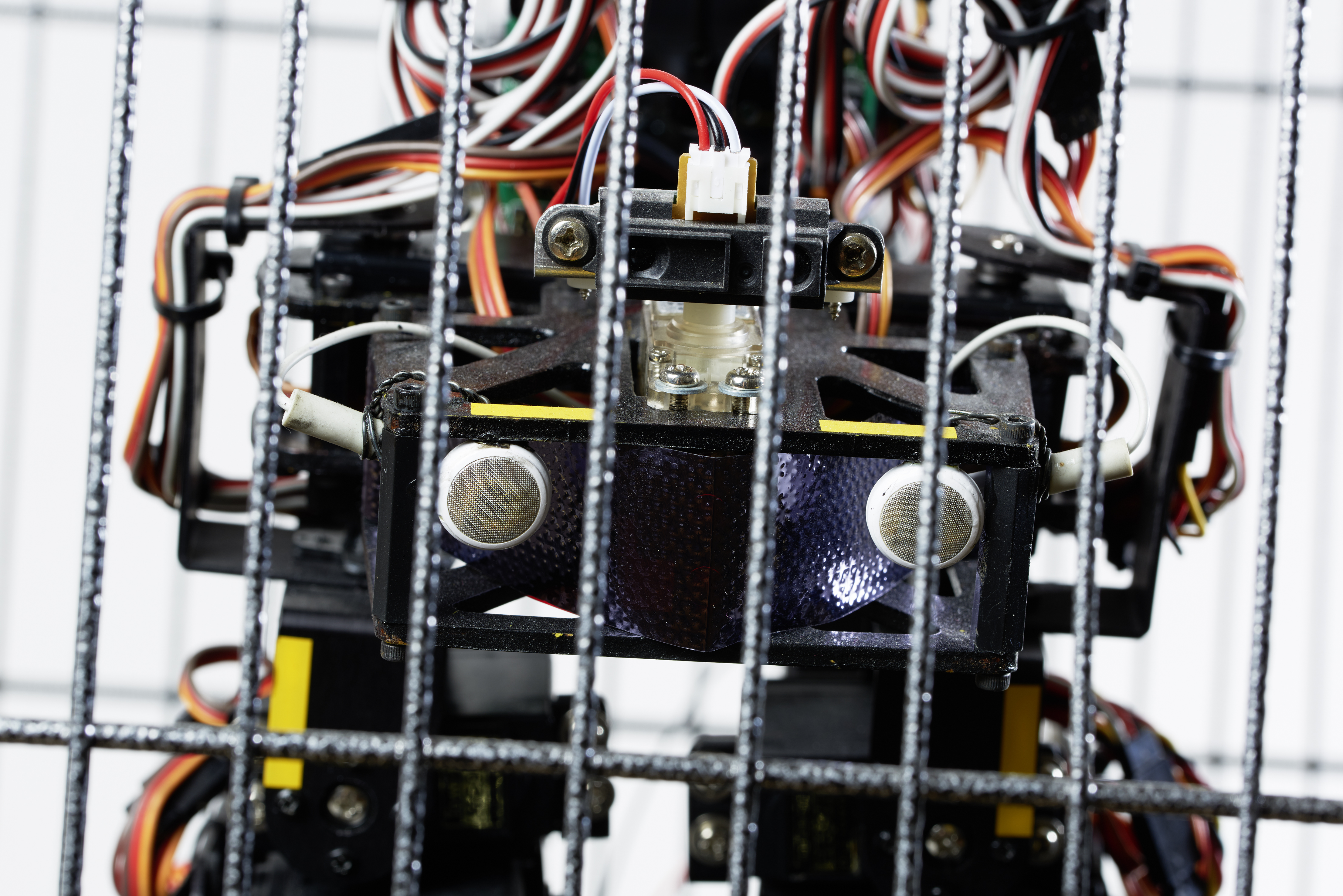 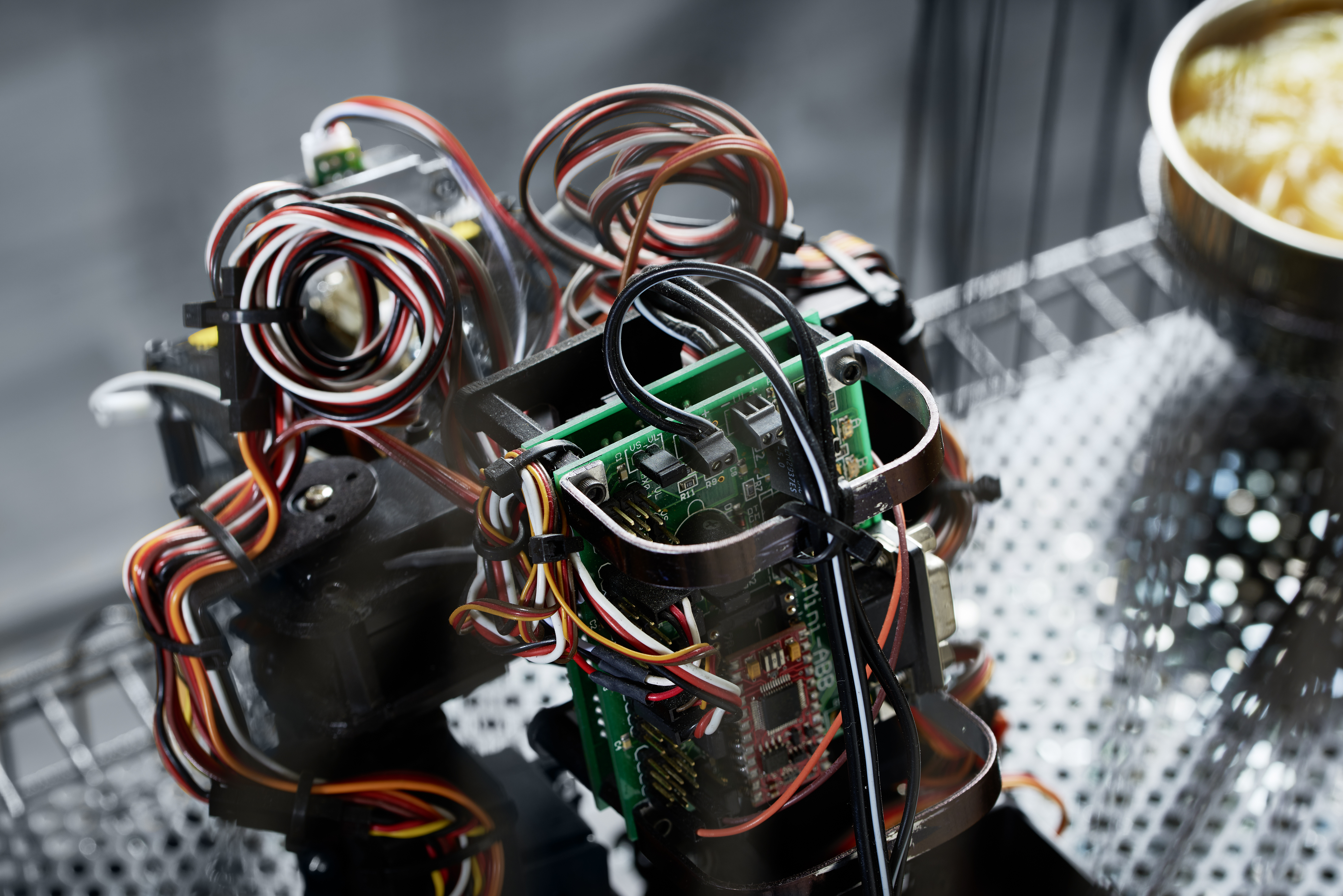 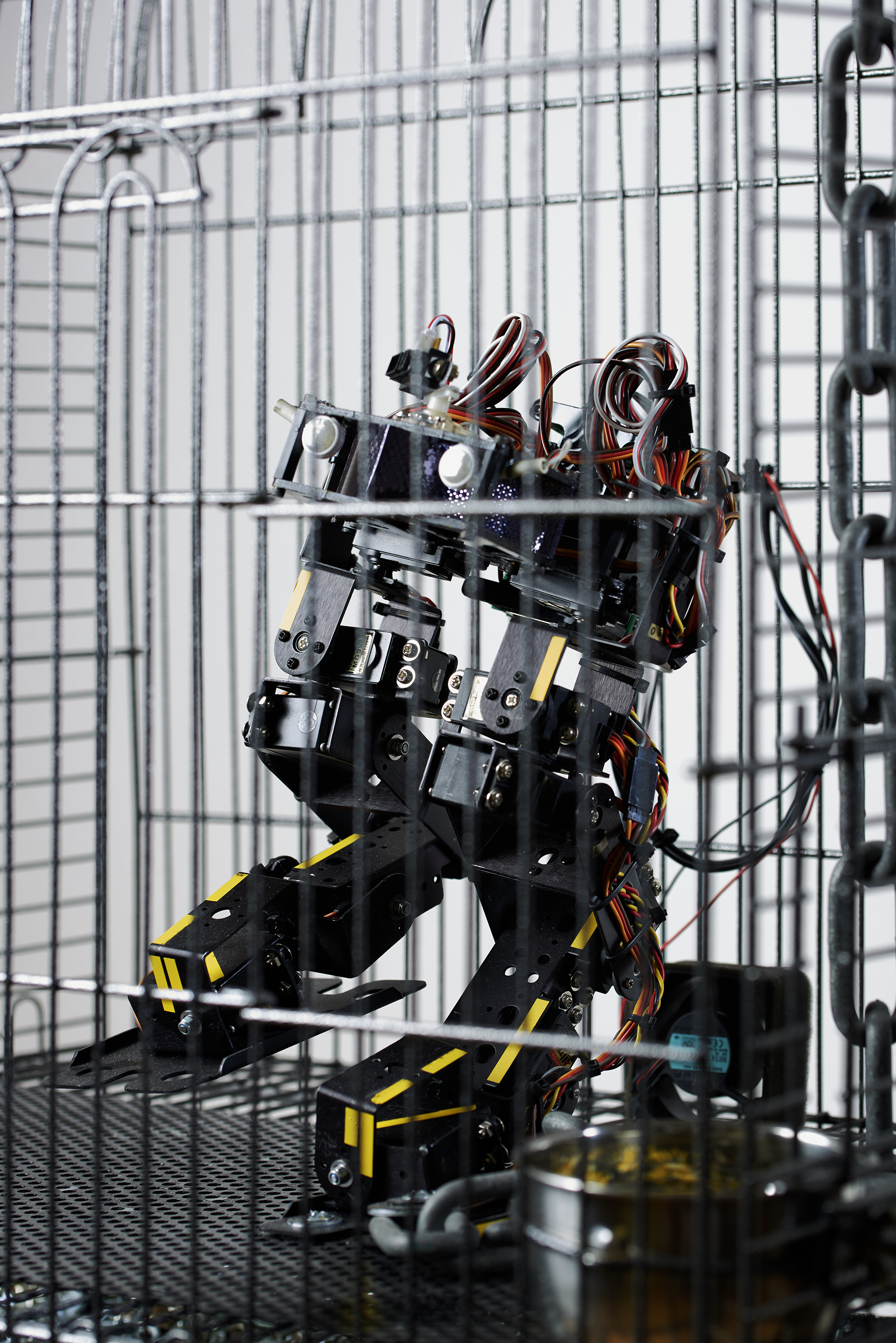 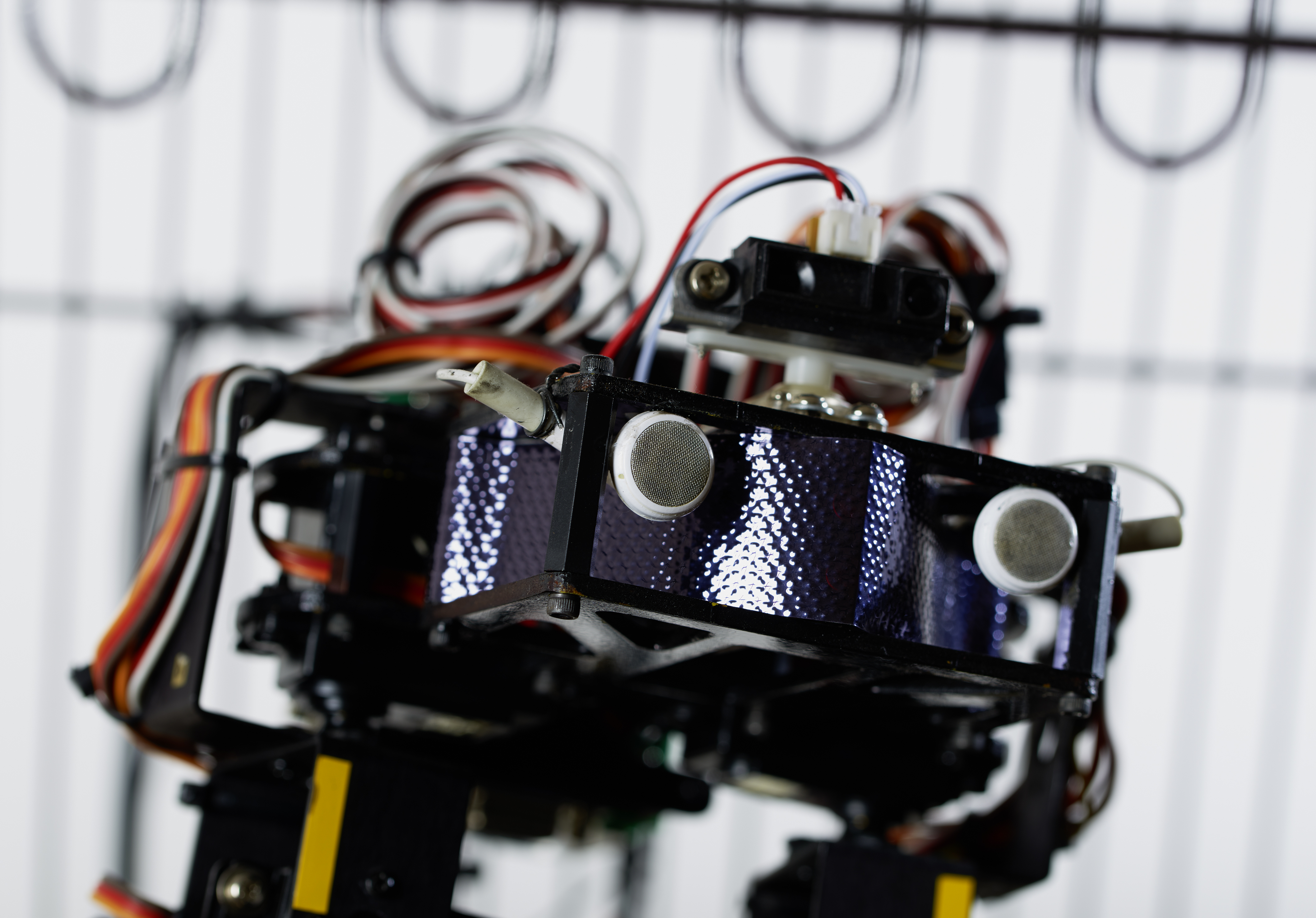 Here is a video of random 5 minutes after switching on: