For many years, I have had a high interest in transcoding events into other events, respectively. media to other media. To make it clearer, the light organ, the music laser is a typical transcoding of an (here: acoustic) event into an optical event. To some extent, notation as a transscription is also a transcoding of music in writing. In the literature note (1) this is called musical transliteration. I would like to stick to that.

If you look at written texts, they consist of words, which consist of letters, there are punctuation marks and finally pauses and paragraphs, empty pages.

The number of characters in a text can be counted, e.g. automatically, provided that the text is digital.
As one might assume after some observation, the distribution of the frequency of the characters varies from text to text. That is true and the difference is, of course, the shorter the text, since for very long texts the frequency of the general frequency of letters in texts in the respective language is similar. Frequency varies from language to language. It is easy to imagine, e.g. between English and German.

Without knowing a text, it is possible to decipher the language used by determining the frequency of the occurrence of the individual letters. Well, this is used in cryptography but I am interested in another aspect:

If I assign a pitch to each letter of the alphabet and let a text be read slowly by program, then the letters in the respective pitches sound one after the other.
I imagine this to be boring and exhausting.
But what I can imagine is:

1) assign a pitch to each letter in the alphabet.
2) count the frequency of letters in a text, e.g. a poem, a novella or a novel
3) create a table, 100% gets the most common letter, 0% the frequency 0, all other frequencies are then on the scale of 0-100% These frequencies control the volume from the pitches, e.g. if the “e” is most common, then it sounds at full volume.
4) The tone length of all tones in this example is equal and results from the total number of letters counted divided by a factor.

The whole result is a conglomerate of tones of a certain length, the composition of which is determined by the text used.

As an installation, the text is then displayed at eye level, as far as readable (e.g. poem), suspended and the sound played on touch via headphones. The next exhibit shows a different text and thus a different tone mixture. So you hear the temporal condensation of the poem, transcoded as “music”.

The poem by Hermann Hesse “The Butterfly” is quite short and well suited for a test:

The following changes are necessary before transliteration:

i had a hurt,
and as I walked through the fields,
since I saw a butterfly,
he was so white and dark red,
blow in the blue winds.

o you! in childhood,
since the world is still so clear tomorrow
and as close as the sky was,
since I saw you for the last time
the beautiful fluegel wide.

you color soft blow,
that came to me from the paradise,
how strange I must and full of shame
before your deep god-gloss
with sproeden eyes!

feldeinwaerts was driven
the weisz and red butterfly,
and as I continued to go on,
was me from paradise
a quiet gloss remained.

Now I read this text with a PERL script and let myself evaluate the letter frequencies,

a table for EXCEL/CALC is created

In EXCEL/CALC, I search for the entry with the highest frequency (E = 81) in this case it is field B5

(the expression $B-5 ensures that when the formula is copied to the other fields B5 remains constant.)

Here is the result:

Now these values can be transferred to a script that I did with PD (puredata). It assigns a unique pitch (constant) to each letter of the alphabet according to this convention:

The volume (velocity) of the respective letter (tones) can be adjusted 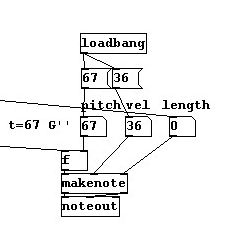 (here you can see that the pitch “67” and the velocity “36” are applied as a constant, with the pitch this is understandable, with the velocity I did it so that I do not have to re-enter the values at every program start. The tone duration is “0” because it hangs on a slider that sets the tone duration for all letters at the same time to the same value, i.e. all sounds resound simultaneously and for the same length.

So I have to enter the percentages letter by letter in the volume variables. 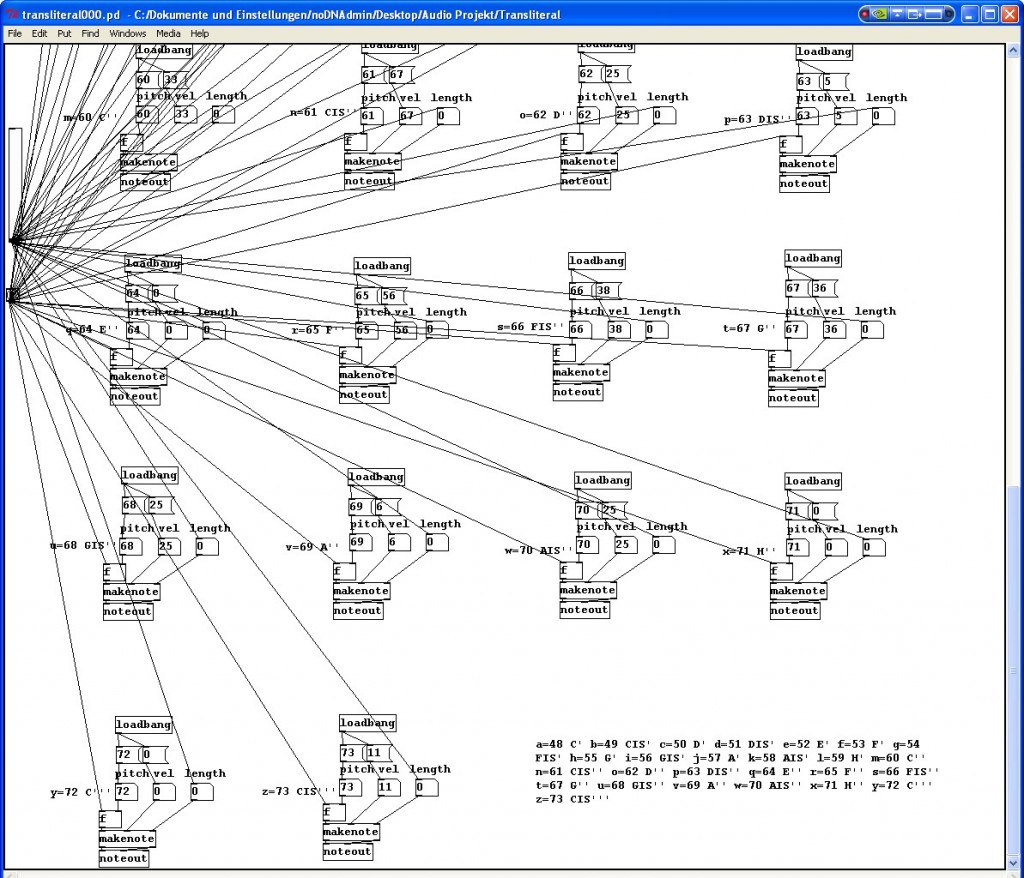